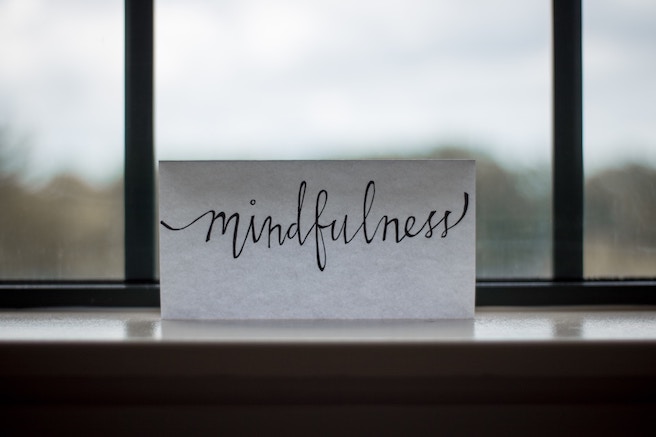 Mindfulness has become a popular term recently but it has been traced back to India (oldest documented evidence was observed as wall art showing people sitting in meditative positions with eyes closed) in approximately 5,000-3500 BCE. It wasn't called mindfulness then, it was known as meditation. Mindfulness/meditation is about being fully present in the here and now, being aware of where we are and what we are doing and essentially tuning out all that is around use that distracts us from being in the here in now.

Anxiety disorders, depression, in fact all mental health disorders take place in that organ that occupies the space between our ears. Our brain. If we address anxiety specifically, it could be argued that this condition is in response to not feeling in control and that all the symptoms associated with anxiety is a result of not feeling in control of the environment, people, events, that take place in our lives. Ironically the only thing we really have control over is the one thing that gives us our sense of not being in control. The Mind.

When an individual experiences bouts of anxiety based on not feeling in control, physical symptoms follow. The most significant constellation of these symptoms is called a panic attack (simply becuase the individual feels like they are having a heart attack).  But essentially these bouts of anxiety exist because of an undisciplined and rigid mind. This is where mindfulness/meditation comes in. Mindfulnees/meditation isn't about just sitting still in one spot, its about focusing the mind.

It sounds simple to be able to be in the present, to not let your mind wander and just focus on your body, breathing and a calm mind. But believe me it isn't!  Give it a try and see how successful you are in steering your wandering mind away from thoughts associated with every day activities for an extended period of time to just focus on your breathing.

In todays world our minds are constantly bombarded with stimulus and our minds have become habituated to this stimulus.  I was on the golf coarse the other day. A twenty something young man was playing on the opposite fairway with a group of friends. Golf to me is about getting out in the fresh air, enjoying the natural beauty that the coarse designer has provided and focusing my mind on my swing (golf is a mental game after all!). I watched as this young man hit his ball and then grabbed his phone and scroll through the phone as he walked toward his ball. He didnt talk to his friends, didn't look up from his phone until he thought that he was close to his ball, put down the phone, hit the ball and repeated the previous behaviour. I think it would be very difficult for this young man to practice mindfulness without considerable help.

As a Clinical Psychologist I have been advocating meditation to address anxiety for over a decade and I have found that individuals who suffer from anxiety struggle with conventional meditation CD's. Conventional meditation CD's have sounds like those of a rain forest, rain hitting on a roof or the sounds of the ocean.  These typically dont work. Why?  These sounds tend to allow the brain to wander versus focusing it. Guided imagery CD's where a person is setting a scene in words for the person to follow in their mind has the best ability to focus the mind for these individuals. But even so, these individuals have to be, in the beginning, mindful of how they are wandering away from the story line and return their focus when this happens. I find that in addition to a guided imagery track that if the sound track has Theta waves embedded in the track then the mind becomes more quiet.

The brain is an electrical/chemical machine. It emits electrical activity that can be observed on an EEG. These electrical emissions are broken down by Neurologists into bundled wave bands. Theta waves are in the 4-8 Mhz range and are slow brain waves (next one down is Delta which is sleep). When a person is experiencing anxiety the brain is very stimulated. While listening to a meditation/mindfulness CD that has embedded Theta waves the brain picks up on this frequency and slows down to pair with it (like tapping your foot to the beat in your favourite music track) and the brain calms down.

So if you would like to try a meditation CD look for one that is a guided imagery, has Theta waves embedded in the sound track and lasts for at least 20 minutes.